Calculate your most fertile period days

If you know when you ovulate, you can increase your chances of getting pregnant. The reason for this is that you’re most fertile during your ovulation.

What does ovulation mean?

Ovulation is a part of your monthly cycle. Your ovulation occurs during each menstrual cycle, this is once a month. During ovulation the mature follicle bursts, this releases the egg and makes its way to the fallopian tube. The egg can be fertilized up to 24 hours after ovulation. Is the egg not fertilized? Then it will dissolve and your period will slowly begin.

When is my most fertile period?

To get pregnant, it is helpful if you know what your most fertile days are. To find out, you need to know what your menstrual cycle is. An average menstrual cycle lasts 28 days, where day 1 is the first day of your period. Approximately half of that cycle (day 14) the ovulation takes place and you are fertile. Below you will find a handy schematic representation of your most fertile days. 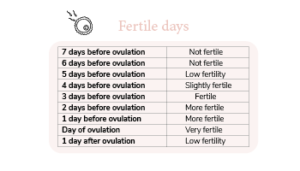 How do I recognize ovulation?

You can recognize ovulation by the following ovulation symptoms;

Tip:
Keep track of when you ovulate, you can do this in your calendar or there are also very useful apps for this. This way you have the best chance to get pregnant in your fertile period.

What if you do not succeed in getting pregnant?

If you do not succeed in conceiving, it may be due to many different things. It is possible that an ovulation does not take place, the egg cannot implant or there is infertility.

Within a period of one year, the chance of becoming pregnant is considerable. Do you want to get pregnant, but feel like it’s not going to happen? Then it is wise to discuss this with your doctor. The doctor will take some tests or refer you to a gynecologist or a fertility doctor.