Xaviera Plas-Plooij is co-author and CEO of The Wonder Weeks!. Xaviera advises various gobal players in the field of babies, is a sought after speaker at fairs and is in daily exchange with mothers and fathers. She knows the needs of parents like no other. With her book series and the associated apps she stands for “A good start to a happy life!” 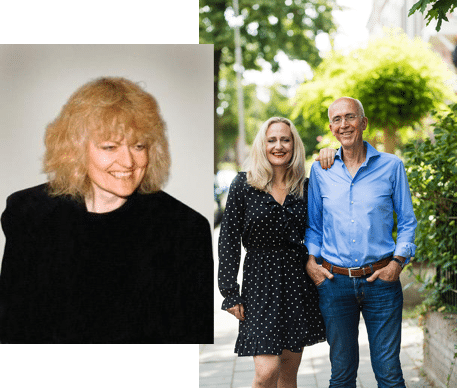 Dr. Frans X. Plooij (born 1946) is co-author of “The Wonder Weeks!”. Together with his wife, dr. Hetty van de Rijt († 2003), they came in 1992 to the realisation that the mental development of babies and infants takes place in leaps and bounds. Frans and Hetty were convinced that parents should learn about their discovery as soon as possible.

They decided to make their findings available, not only to the professional audience but also to the general public. The idea for “The Wonder Weeks!” was born. For years, “The Wonder Weeks!” was one of the bestselling books. Frans X. Plooij, the internationally recognized expert in the field of early childhood development, is a committed father and for several years also grandfather of three grandchildren.

A life for babies

As soon as Frans and Hetty met for the first time, they knew that their lives are about children. Both studied biology, psychology, pedagogy and anthropology in Nijmegen and Amsterdam. After graduation, they went to Tanzania together to observe chimpanzee children at Jane Goodall. In Africa, the inspiration for their work came. At the University of Cambridge, England, they developed their theories about the development of chimpanzee children. They discovered the proof of “leaps”.

Back in the Netherlands, they became parents of a daughter. Frans worked as a research assistant at the University of Nijmegen and later as head of the research and development department at the Municipal Institute of Pedology in Amsterdam. Hetty took care of their daughter at home. She started working outside the house again, when her daughter was ten years old. In a research she devoted herself intensively to mothers.

All mothers participating in this study kept a detailed diary of their babies’ development. In addition, Hetty spent days in the respective families and watched the babies. So Frans and Hetty discovered that babies made “leaps”. So not only chimpanzees, but also human children undergo a mental development in a certain period of life.