Home Blog Guestpost I was beyond THRILLED when I found the Wonder Weeks book and app.

I was beyond THRILLED when I found the Wonder Weeks book and app.

Katrina (34) is a mom of 3 (Caroline (4), April (angel), & William (2 months) that writes about her parenting journey over at MamasOrganizedChaos.com. She is a former chemist and engineer that is now a stay at home mom. Katrina is a breastfeeding, cloth diapering, schedule using Mama that loves the Wonder Weeks!

“Mama’s Organized Chaos“- It’s the blog name I chose as I was in the midst of newborn life with our first child.

As I look back on it now, I realize just how fitting it is. I now have another newborn. We are in the “organized chaos” phase of life for sure!

When you are a new mom it is so hard to filter through all of the information that is out there regarding taking care of your baby.

We are told that breast is best, and that we need to feed on demand. We are told that waking a baby is the last thing you should do, and on and on. The “advice” is endless.

The problem, is that we are still left with a baby that cries and can’t tell us what he/she needs, and we are left not really knowing what to do or what is “wrong”.

We are left to second guess our parenting decisions because our baby won’t stop fussing and nothing seems to be working right.

We aren’t told ahead of time about things like growth spurts, or developmental leaps.

I was someone that decided to go against the popular notion of feeding on demand. I breastfed, but put my baby on a schedule.

Going against what you’ve heard so frequently can be daunting. Any time naps got disrupted, I second guessed myself. I worried, even though I knew our decision to use schedules was best for us and seemed to make such great sense for our baby.

The schedules helped to “organize” the chaos of the infant phase.

I was beyond THRILLED when I found the Wonder Weeks book and app.

Everything suddenly fell into place and made sense. The Wonder Weeks book seemed to explain the feeling of “chaos” and disruption perfectly.

Almost down to the DAY, the app predicted when our baby was going to be extra fussy.

Our schedules would be working perfectly, and then all of the sudden we’d have a hugely fussy baby on our hands, and it didn’t make sense.

But the Wonder Weeks explained it perfectly.

Our daughter would seem extra fussy, and so I’d check the Wonder Weeks app. It always confirmed that she was in a developmental leap! And I’m not joking that it was predicting almost down to the day.

I’d then read the chapter on that leap in the Wonder Weeks book. I could go down the list and check off all of the new skills that were obviously being learned. It was absolutely amazing.

When the leap was over, I had my calm baby back and all was back to “normal”.

I absolutely loved watching our daughter go through these leaps and learn so many new skills.

The book was so reassuring. Just knowing that it wasn’t anything I was doing or missing- the fussiness was being caused by a leap– that was such a great gift to give me as a new mom.

Now, as I watch our son go through his second leap, I am again awe struck with the accuracy of the timing and the skills that are learned.

And, I can confidently implement our baby schedules this time around, knowing how much the schedules helped to ease these fussy times.

Our son is currently in leap 2. He’s starting to recognize patterns in his world, just as the book explains.

He’s learned that we do eat, wake, sleep cycles throughout the day, and seems to know when his nap is coming.

He’s learned that once he’s in his room and in his sleep sack, it is nap time. And guess what? He doesn’t want to miss out on anything, so he has started crying as soon as I get him in his sleep sack!

My baby that once put himself to sleep, is now needing more assistance, since he is aware of the fact that I’m about to leave him in his crib.

He’s holding his head up much higher now, and he’s starting to play with his voice, and examine things up close.

The growth that happens during these weeks is phenomenal to observe.

The fussiness is real. This book helped me to know that there is a reason for the fussiness. There is also an end to it soon. And it has allowed me to be calmer as a parent, and simply observe and take it all in.

The Wonder Weeks has been an invaluable tool for me in my parenting journey, and I am so excited to watch it all unfold once more over this next year with our son.

Learn from our users experience with leaps 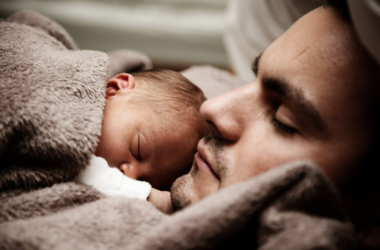 From week 7, your baby enters leap 2, the world of patterns. Your baby could show the first signals of… Read more 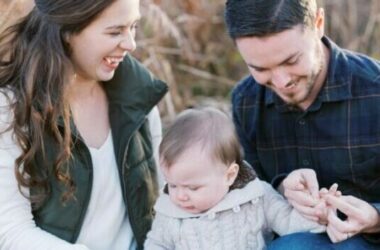 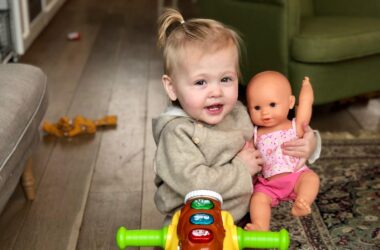